Thomson welcomes first female police chief: “A dream for so many years”

THOMSON, Ga. (WRDW/WAGT) – Thomson’s top cop is now a woman. Courtney Gale just started this week as the first female police chief for the city of Thomson. In a historically male-dominated field, she says she’s bringing more than just girl power to the job.

Thomson police chief, Courtney Gale has been an officer for 24 years. She worked with the Athens-Clarke County Police Department and the University of Georgia Police Department before taking on the chief position in Thomson.

”This has been a dream for so many years I’ve worked towards it. It’s so exciting it’s so welcoming this community has really opened their arms and is swooping me up,” said Gale.

Chief Gale says she’s been in law enforcement this long because of the people.

“I loved being a police officer. I loved helping people. It was more getting that satisfaction if there was a victim of a crime, having some closure for them,” she said.

She says her goal for Thomson is to work on the relationship between the officers and the community.

“It’s got to be an honest relationship where there are going to be some things that people are not happy about, but at the same time creating a safe environment that welcomes residents and visitors to whatever activities are here whether it’s work or play,” she said.

Back in 2007 Chief Gale was stabbed 10 times while on the job and had to undergo rehab. She says this didn’t stop her from getting back and doing what she loves.

“We’re going to try to get back to law enforcement because that’s where my heart is, and that’s where I landed and I just didn’t stop. It’s about serving people, service to others, I just couldn’t let go of it,” she said.

Chief Gale says she looks up to other women in law enforcement who have paved the way before her.

“I can only hope that I live up to what they did for me, because I look back and think what hurdles they had to jump through and so there’s still hurdles, but I think there’s so many opportunities out here and it just takes a person saying this is what they want to do,” she said.

And while becoming police chief was always goal, it ultimately became a passion.

“People were making fun of me because they were like what time did you get here and I was like it doesn’t matter, so I just really love what I do and so it’s work then,” she said.

She says she does want to work on safety initiatives but ultimately building relationships with the community first. She says that will allow her to learn what they would like to moving forward.

SAVE THE DATE: Promotional Assessment Opportunity 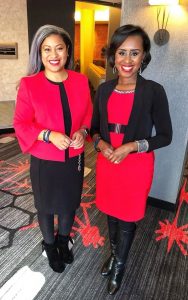